Last week I responded to a Tweet by Artscape asking "Which circus job would you choose?" and as a result* I won two tickets to the first edition of a series of Artscape street parties at Wychwood Barns, taking place Wednesday, August 28 from 6-10pm ($15/adults, $10/children 7-16, kids 6 & under free). For their first Street Party, Artscape chose a circus theme so it was off to the "circus" we went! (*For those who care to know, I replied that I would choose the job of ringleader, mostly because I've always wanted to wear a tailcoat.) 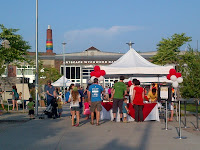 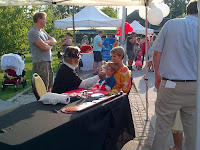 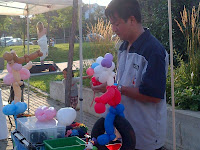 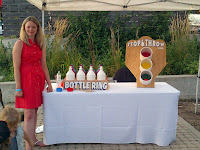 For those who have never been to Wychwood Barns before, you can brush up on its history HERE, courtesy of the Wychwood Barns Community Association (WBCA). Personally, I wasn't aware of its existence until I visited it last year as part of Doors Open. What was once a TTC streetcar repair house (built in 1913 -- centennial celebrations will take place this September), the Artscape Wychwood Barns are now "a community cultural hub where a dynamic mix of arts, culture, food security, urban agriculture, environmental and other community activities and initiatives come together". All of this was on display in full force for the first Artscape Street Party. In keeping with the circus theme, there were the regular circus features: face painting, balloon animals, carnival games, music and (most importantly) food! 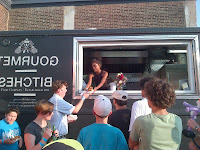 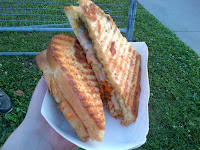 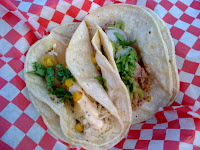 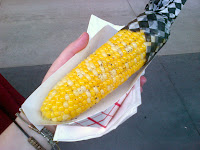 There weren't too many food vendors present for the event, which meant that we were able to sample something from everyone. Two food trucks were parked outside the barns and, in typical food truck fashion, were the most popular food attraction with busy queues throughout the evening. At Gourmet B1tches, we tried the grilled cheese sandwich with guac and it was delicious, with a really nice spicy kick. Over at Gourmet Gringos we split an order of tacos, chicken for me and pork for my husband. SO. GOOD. Cilantro everywhere. Also present at the circus were local neighbourhood restaurant The Crest and popular Roncesvalles "urban barbeque" restaurant Barque Smokehouse. 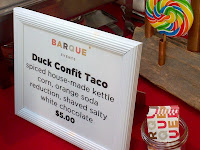 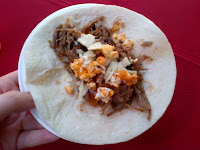 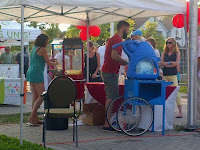 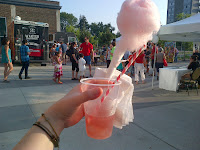 Whenever corn on the cob is being served up I can't resist, so we grabbed a cob from The Crest (whose vendors were all wearing top hats, a nice touch). This might be the first summer event I've attended where corn on the cob was being boiled (as opposed to grilled) and it was criminally juicy and sweet. Barque Smokehouse was fully into the circus theme for their menu, offering a Duck Confit Taco topped with (brace yourselves) spiced house-made kettle corn (!), an orange soda reduction (!!) and shaved salty white chocolate (!!!). How can you pass up something like that? It was fantastic! Though these four spots were the only "official" food vendors, one of the best surprises of the evening was that circus treats were included with the price of admission. Words cannot explain how excited I was to learn that I had FREE popcorn, cotton candy and sno-cones coming my way. BTW, cotton candy & pink lemonade go really well together. 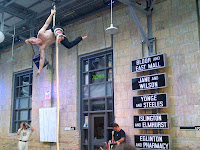 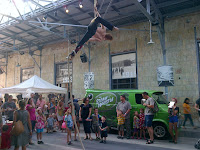 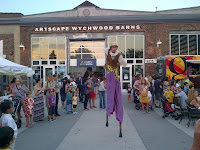 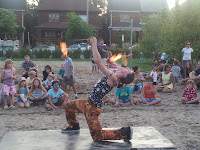 The Street Party was a very family-friendly event and there were many circus themed acts happening throughout the evening to keep kids entertained. Inside the barns (the "Big Top") there were acrobatic acts high above our heads, and outside there were jugglers, stilt walkers and in the sand pit there was an impressive fire dancing routine. Children were mesmerized by all the performances, which was no small feat considering how much free sugar was available! 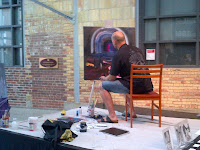 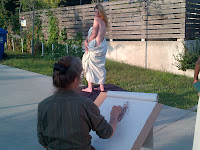 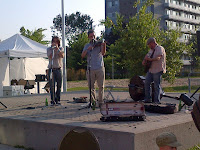 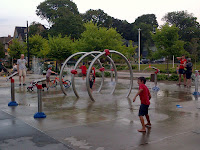 Alongside the circus acts there were many other activities which were more indicative of what normally takes place at the Artscape Wychwood Barns. Artists painted live for an audience inside the barns and outside a model posed for a free life-drawing demonstration as a band played upbeat folk-roots music for the enthusiastic crowds. After we filled our stomachs we took a walk around the grounds and out back children played on the playground and waterpark area. We also stopped to look at the various gardens growing outside, each with a geographical theme. Throughout the year the Artscape Wychwood Barns are open to the public Monday-Sunday from 9am-5pm, with a popular Farmer's Market courtesy of The Stop Community Food Centre (whose Green Barn is on site) taking place Saturdays from 8am-12pm. Once a month it hosts the Barns Art Market (the next one will take place Saturday, September 28 from 9am-2pm), which is a great time to visit. Or you can wait for the next Artscape Street Party, which is sure to be another amazing evening. 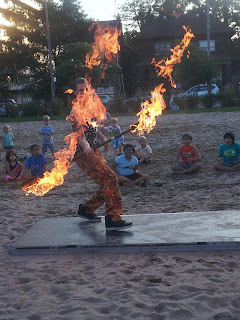 Posted by Katharine MacNevin at 2:16 PM

Comments? Concerns? Question marks? Send me an e-mail at toseetodoblog@gmail.com!

Katharine MacNevin
I live in downtown Toronto and I'm always looking for the next cool, interesting, awesome, random thing to do in the city. I love coffee, singing and colourful things. I hate mess, direct sunlight and being told what to do. I have some ginger rage and nothing brings it out as much as the TTC. I have a fear of hippos and mold. I am a fan of big words and cuss words. I write but I'm not a writer. I'm a smoker but I don't smoke. I have a smart husband and a grey cat.